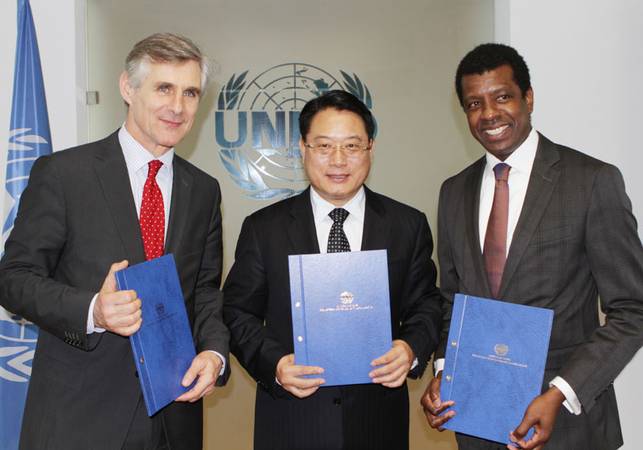 On March 17, 2014 the SIDS Sustainable Energy and Climate Resilience Initiative (SIDS DOCK), the United Nations Industrial Development Organization (UNIDO) and the Government of Austria signed a Memorandum of Understanding (MOU) to assist Small Island Developing States (SIDS) in Africa, the Caribbean, the Indian Ocean and the Pacific in the creation of a network of regional sustainable energy promotion centres, which came to be known as the Global Network for Regional Sustainable Energy Centres (GN-SEC).

A consultative preparatory process was executed by SIDS DOCK and UNIDO in cooperation with the CARICOM Energy Unit and with the financial support of Austrian Development Agency (ADA). The process included broad stakeholder consultations, the development of a needs assessment and a project document on the first operational phase of the centre.

The needs assessment revealed that a significant number of Caribbean countries have made considerable progress in the creation of enabling national environments for the promotion of renewable energy (RE) and energy efficiency (EE). However, in some areas, the implementation of policy commitments is still in the initial stages and have not been transformed into real investments or created a vibrant market and industrial sector. 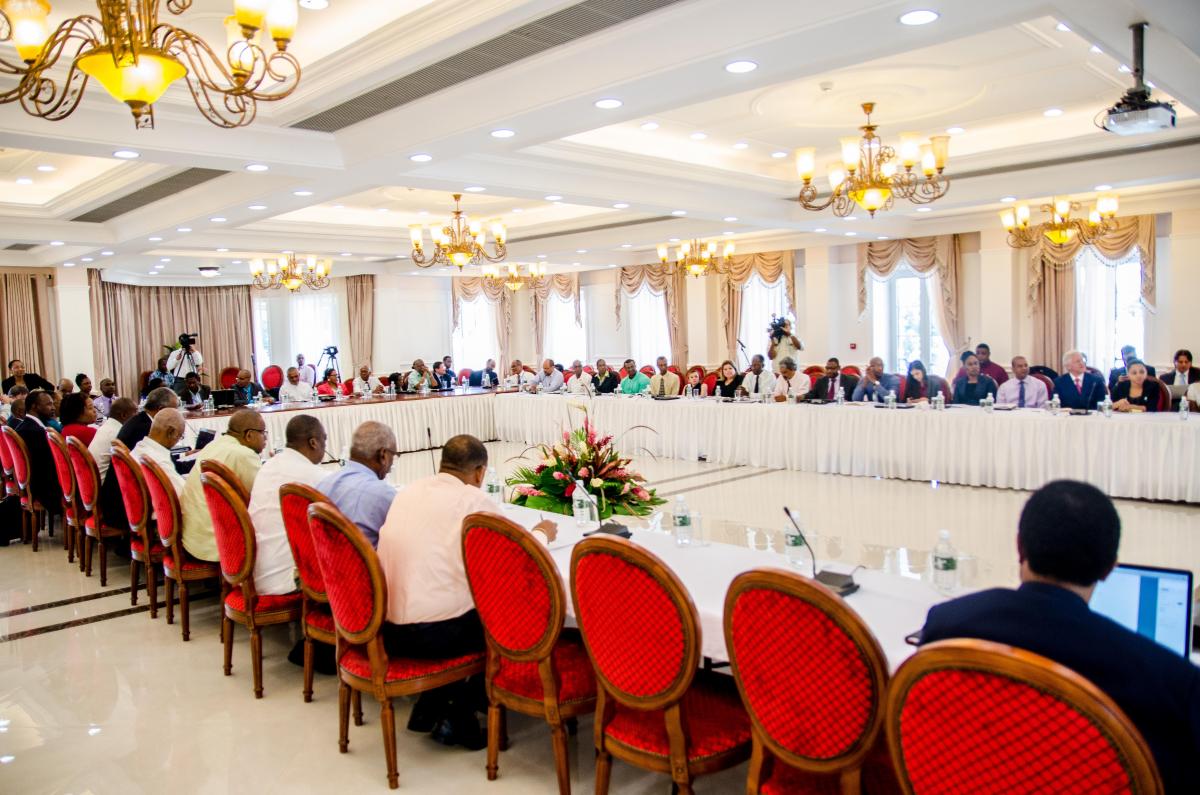 There is also the impression that the local private sector and industry in the Caribbean do not take advantage of the growing sustainable energy market and job opportunities, among other findings. Based on the identified gaps, the creation of the Caribbean Centre for Renewable Energy and Energy Efficiency (CCREEE) was recommended.

The technical and institutional design of the CCREEE was validated during a regional workshop, organized by SIDS DOCK and UNIDO, from 21 to 22 July 2014 in Roseau, the capital of the Commonwealth of Dominica. Thereafter, CCREEE was considered during the Fifty-Fourth Special Meeting of the COTED (Energy), as well as the Fifty-Fifth Special Meeting of the COTED (Energy and Environment), held in Guyana from 2-5 February 2015.

The Thirty-Sixth Regular Meeting of the Conference of Heads of Government of the Caribbean Community (CARICOM), held in Bridgetown, Barbados, 2 to 4 July 2015, endorsed the establishment of the CCREEE as the implementation hub for sustainable energy activities and projects within the region. The offer of the Government of Barbados to host the centre in Bridgetown was accepted, based on the results of a competitive selection process. 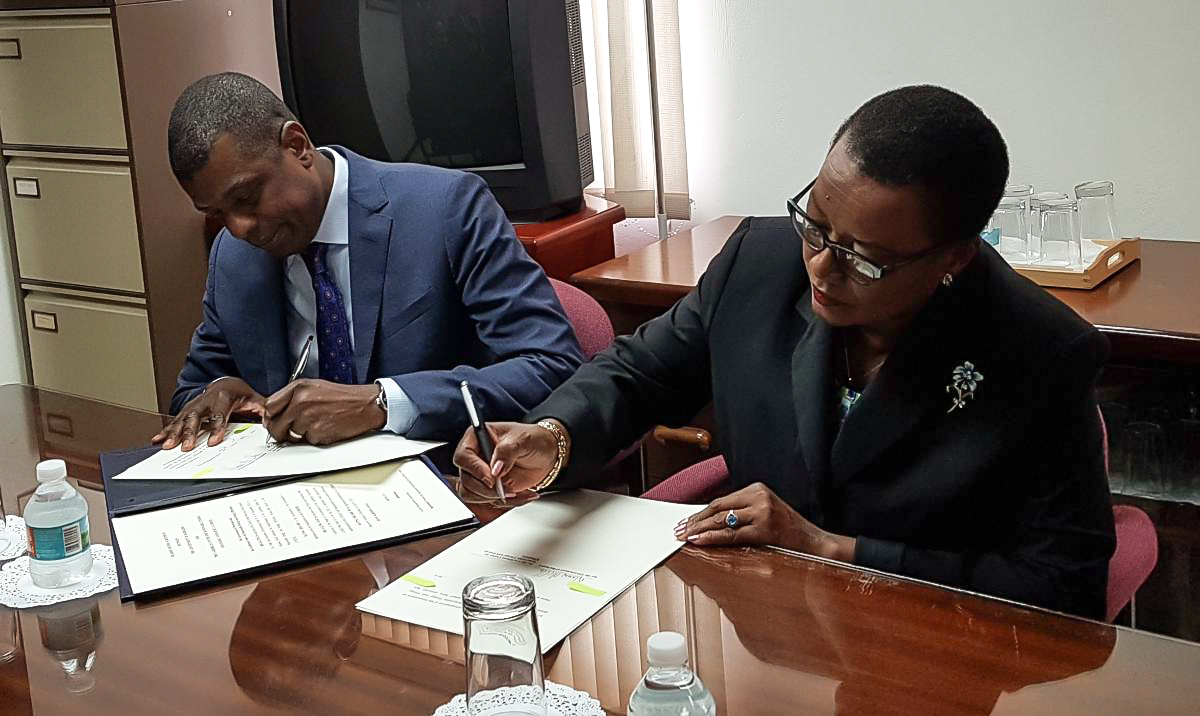 After receiving a sufficient number of ratifications, the legal agreement establishing the CCREEE went into force on 19 May, 2018. The agreement was opened for signature at the Thirty-Eighth Regular Meeting of the Conference of Heads of Government of CARICOM in Grenada in July, 2017. On 22 May 2018 the CCREEE Headquarters Agreement was signed between the Government of Barbados and the CCREEE. With the effectiveness of both agreements the Center received full legal personality in line with CARICOM laws and regulations.

The creation of the Caribbean Centre for Renewable Energy and Energy Efficiency Centre (CCREEE) is closely linked with the Energy Programme of the CARICOM Secretariat, the Sustainable Energy and Climate Resilience Initiative (SIDS DOCK), as well as the creation of a wider network of regional sustainable energy centres for Small Island Developing States (SIDS) in Africa, the Caribbean, the Indian Ocean and the Pacific.

In recent years, the CARICOM Secretariat has taken major steps to mainstream renewable energy and energy efficiency into its regional policies, programs and activities. The experience of other regions has shown that regional cooperation can be a useful tool to facilitate the creation of sustainable energy investments, markets and industries.

In April 2008, at the background of the record oil price spike, the CARICOM Secretariat commenced the Energy Programme as one of the programmes within the Directorate of Trade and Economic Integration. The Energy Programme was assigned the responsibility of implementing a programmatic approach to energy sector developments in the Region. This established a departure from the traditional “project approach” and aims to facilitate greater responsiveness in carrying out the Community’s energy related mandates as well as fostering a harmonized approach to the region’s energy issues.

The Forty-First Special Meeting of the Council for Trade and Economic Development (COTED) on Energy held in March 2013 approved the CARICOM Energy Policy, which provides direct focus on the use of renewable energy and energy efficiency to propel the development of the Region. At the same COTED, the Caribbean Sustainable Energy Roadmap and Strategy (C-SERMS) was approved to support the Policy with, inter alia, initial regional level targets for renewable energy contribution to total electricity generation in CARICOM, specifically, contributions of 20% in 2017, 28% by 2022 and 47% by 2027.

The Energy Programme is executed by the Energy Unit of the CARICOM Secretariat and has responsibility for policies, strategies and coordination on regional energy matters. The CARICOM Energy Policy (CEP) and the Caribbean Sustainable Energy Roadmap and Strategy (C-SERMS) provide orientation for the Energy Programme. The regional strategy on energy was also anchored within the Five Year Strategic Plan of the Caribbean Community (2015-2019), which was approved by the Thirty-Fifth Heads of Government Conference held in 2014, in which energy has been identified as a cross-cutting theme but with particular focus on the building of economic and environmental resilience within the Community.

Within the regional energy landscape, the C-SERMS platform serves a coordination and knowledge sharing mechanism for the hosting of regular stakeholder discussions that are related to the planning and implementation of the renewable energy and energy efficiency dimensions of the CARICOM Energy Policy, through the C-SERMS. The Energy Unit of the CARICOM Secretariat is responsible for the management of the C-SERMS Platform. CARICOM Energy Week is being coordinated and managed through the National Energy Focal Points Group of the Platform, which is chaired by the Energy Unit of the CARICOM Secretariat.

In 2011, the Small Island Developing States (SIDS) Sustainable Energy and Climate Resilience Initiative (SIDS DOCK) was created by the Alliance of Small Island States (AOSIS), the Caribbean Community Climate Change Centre (CCCCC) and the Secretariat of the Pacific Regional Environment Programme (SPREP). The innovative mechanism promotes the scaling-up of technical and financial support, as well as SIDS-SIDS cooperation, for the transformation of the energy sector of SIDS in Africa, the Caribbean, the Indian Ocean and the Pacific. SIDS DOCK acts as critical vehicle in order to achieve SDG 7 on sustainable energy and the established SIDS DOCK goals: to increase energy efficiency by 25 percent (2005 baseline) and to generate a minimum of 50 percent electric power from renewable sources and a 50 percent decrease in conventional transportation fuel use by 2033: Island Energy for Island Life 25-50-25 by 2033.

On 30 September 2015, the SIDS DOCK Treaty entered into force, recognizing the establishment of the historic intergovernmental organization vested with the full powers of the United Nations (UN). The creation of SIDS DOCK responds to the call for innovative SIDS-SIDS partnerships to implement the “SIDS Accelerated Modalities of Action (SAMOA) Pathway” which was adopted at the Third International Conference on Small Island Developing States (SIDS), held from 1-4 September 2014 in Apia, Samoa. The conference called for innovative partnerships to strengthen SIDS-SIDS cooperation.

The environment is where we all meet; where all have a mutual interest; it is the one thing all of us share.

The creation of CCREEE responds to the difficult energy situation in much of the Caribbean. Caribbean countries are facing the challenges of access to modern, reliable and affordable energy services, energy security and climate change mitigation and adaptation simultaneously. The challenges are intertwined with the region’s economic and social challenges. The success of socio-economic and industrial development strategies in the Caribbean region will highly depend on the improvement of the current energy situation.The energy challenges can be summarised as follows:

By developing their renewable energy sources and putting in place energy efficiency measures, many countries could have significant opportunities to reduce their overall fossil fuel consumption and thus improve their energy security, while at the same time promoting clean economic growth and lessening dependence on costly, imported petroleum fuels. The development of the sustainable energy potential is interrelated with a broad range of positive socio-economic impacts (e.g. reduction of fossil fuel imports, increased affordability for low-income groups through the reduction of electricity consumer prices in the long term, improved financial situation of utilities, increased competitiveness of companies and industry, reduction of stand-by diesel generators, creation of green jobs).

The region is endowed with a broad range of renewable energy sources (bioenergy, solar, wind, hydro, tidal and geothermal energy). There is significant potential for EE improvements with regard to lighting, appliances, buildings, transmission and distribution and industrial processes particularly in urban areas. Small-scale decentralized renewable energy (RE) solutions can be cost-effective options to satisfy the needs of the rural population located far away from the main grid (relevant for parts of Belize, Guyana, Haiti, and Suriname). RE&EE solutions can be an important driver to increase the productivity and competitiveness of industrial key sectors – such as food processing, fishery, manufacturing of high value niche products and services and tourism. A growing sustainable energy market offers also new income and job opportunities for energy service and manufacture companies.