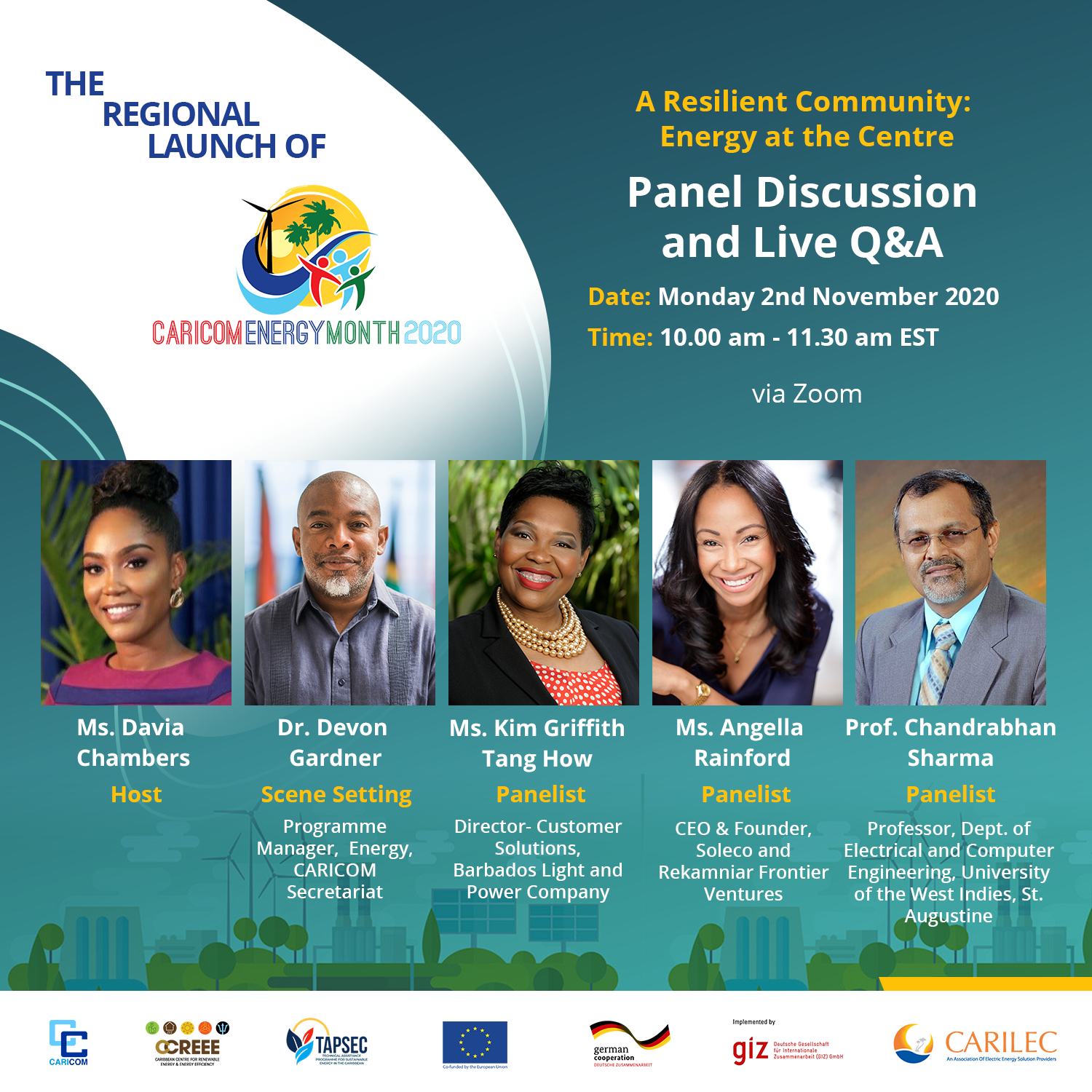 Under the theme “A RE-silient Community: Energy at the Centre”, CARICOM Energy Month got underway on 2 November with a virtual regional launch in the form of a panel discussion.

The 2020 launch was held by the Caribbean Community (CARICOM) Secretariat’s Energy Unit in collaboration with the Caribbean Centre for Renewable Energy and Energy Efficiency (CCREEE), the Caribbean Electric Utility Services Corporation (CARILEC), along with the European Union (EU) and the German Federal Ministry of Economic Development and Cooperation (BMZ) funded Technical Assistance Programme for Sustainable Energy in the Caribbean (TAPSEC). Tobagonian media personality, Ms. Davia Chambers hosted the event. On the panel of regional energy, finance and policy experts were Dr. Devon Gardner, Programme Manager – CARICOM Energy; Ms. Kim Griffith Tang-How, Director of Customer Solutions at the Barbados Light and Power Company (BLPC); Ms. Angella Rainford, Chief Executive Officer and Founder of Soleco and Rekamniar Frontier Ventures; and Professor Chandrabhan Sharma, Professor in the Department of Electrical and Computer Engineering at the University of the West Indies, St Augustine campus.

Setting the tone, Dr. Gardner gave an account of the region’s renewable energy ambitions. He noted that in 2010, renewable energy usage in CARICOM stood at six per cent. This has grown to 12.3% in 2020 with the intention of further growth in renewable energy utilisation to 40% by 2030. Dr Gardner further noted that, within the region, the conversation around cleaner energy, which commenced at the beginning of the last decade, had grown to include adaptation to difficult circumstances, energy security – specifically as it relates to price volatility and disruptive supply chains for imported fossil fuels – and multidimensional resilience.

The CARICOM Energy Programme Manager stressed the need for improving the policy and regulatory frameworks within countries and increasing financing opportunities from both public and private financiers to achieve renewable energy targets set by the region.

Speaking to the Barbados experience, BLPC Customer Solutions Director Ms. Griffith Tang-How reflected that the year 2020 underscores the need for Barbados to continue the path for energy independence and energy security. Griffith Tang-How further highlighted that the National Energy Policy of Barbados targeted 100% renewable energy by 2030. In achieving this, she added, the island currently has 117 Megawatts of Renewable Energy with 50 Megawatts being solar energy. The BLPC Director said that out of the 50 Megawatts of solar energy, 10 Megawatts were utility-owned while the other 40 Megawatts were customer-owned distributed systems.

Furthering its renewable energy targets, Griffith Tang-How noted that her utility company had applied to launch the Integrated Utility Service (IUS) model pilot for Barbados. That model would see customers receiving upfront funding for energy efficiency and renewable energy equipment and devices, while at the same time being allowed to repay the cost of this equipment and devices through their electric utility bills.

As the head and founder of two successful renewable energy-focused companies, Ms Angella Rainford plugged the need for upholding the rule of law, corporate governance and transparency to secure the right type of investors with honesty and integrity to benefit both parties. While there were always risks associated with major projects, Rainford acknowledged that investors, in turn, were always pricing these risks which could sway an investor’s decision, considering both the cost of capital, as well as the return to the investor. The dual-company CEO noted further that the cost of insurance was also a major risk on the capital markets as well as securing insurance from inception, because of extreme weather conditions such as hurricanes, which could ultimately affect project implementation.

Plugging the interconnectedness of energy, Professor Sharma of the UWI St Augustine’s Electrical and Computer Engineering Department noted that energy use, the development state of a country, and the human development index, were all connected. This, caused users to expect a more resilient grid. Professor Sharma outlined several measures for ensuring energy resilience which include:

Professor Sharma called for regional coordination for easy access to devices, power lines, power transformers, and the supporting technical capacity, after extreme weather conditions damage power infrastructure. Professor Sharma acknowledged, that while technical expertise did exist in the region, it was sometimes concentrated within utility companies.

Thinking more futuristically, BLPC Director Griffith Tang-How stated that the electric utility company of the future must be built on understanding disruption, digitisation, and decarbonisation. She noted additionally that there must be a coordinated approach for renewable energy targets across the region. On this note, Griffith Tang-How called for energy experts and policymakers to sit and ask the difficult questions to truly establish a parameter for renewable energy targets that blended vision and realism. Acknowledging the limitation of growing economies within the Caribbean, Griffith Tang-How called for policymakers and regulators to ensure the renewable energy transition was phased and that the varying experiences of customers were taken into consideration, especially affordability among already-vulnerable, lower-income groups.

For her part, Soleco and Rekamniar CEO, Ms. Rainford, noted that with market decentralisation, customers investing in generating assets would need to explore financing from commercial banks for which this financing was not always available. Rainford plugged Barbados as a regional example where installations could be used as collateral and security for financing. Rainford lastly called for capital markets to examine risks and facilitate investments into development, especially where the burden was sometimes placed on customers to fund capital or put other security in place to underwrite lending.

Responding to a question posed about equity capital in the region, CARICOM Energy Programme Manager Dr. Gardner noted that the quantum of equity capital was enough in the Caribbean to meet the targets of the region. He added that to achieve 3.5 Gigawatts of Renewable Energy by 2030, between US$12billion and US$15billion was required. Dr. Gardner pointed out that the amount of capital was not the issue, but rather the terms and conditions associated with risk management and interest. To this point, he noted there were efforts to reduce risk and locate development capital so that the region could secure more favourable terms and conditions for the market.

This is the fifth observance of CARICOM Energy Month (CEM). CEM is an annual observance that spotlights the energy thrust of the Caribbean through increased awareness of the sector and the sustainable energy transitions therein.

To view the launch of CARICOM Energy Month (CEM), follow this link. 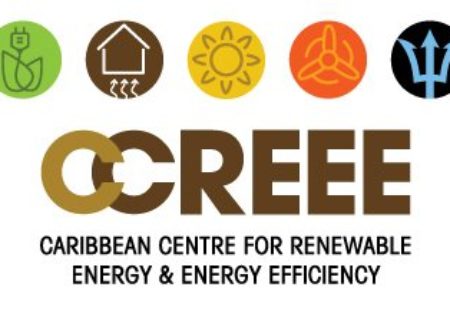 Vacancy: We search for a CCREEE Communications and Public Relations (C&PR) Specialist 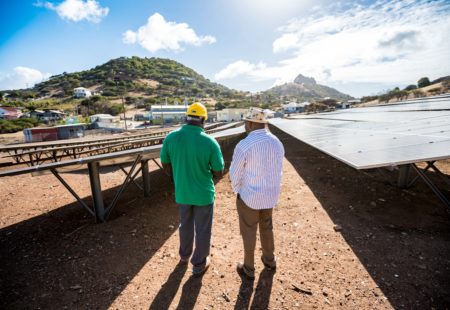 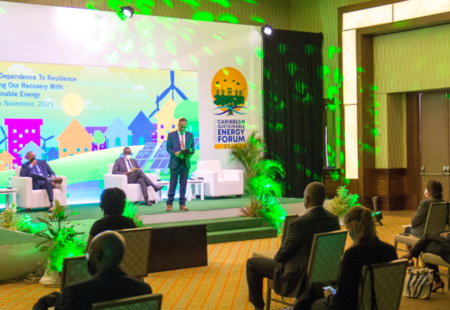