First colonized by the Spanish, the islands came under British control in the early 19th century. The islands’ sugar industry was hurt by the emancipation of the slaves in 1834. The discovery of oil on Trinidad in 1910 added another important export. Independence was attained in 1962. The country is one of the most prosperous in the Caribbean thanks largely to petroleum and natural gas production and processing. Tourism, mostly in Tobago, is targeted for expansion and is growing. 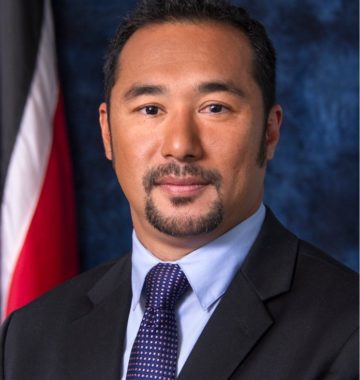 Minister of Energy and Energy Industries

Minister of Energy and Energy Industries

The twin-Island Republic is the southern-most islands of the Lesser Antilles, separated from Venezuela by 11km (7mi) of water known as the straits of the Gulf of Paria. Trinidad, the larger of the two islands is 30 km (19 mi) from Tobago.

Both islands were first settled by Amerindians. Trinidad became a Spanish outpost from the late 16th century. French and British settlers, slaves from Africa and indentured labourers from India came during the 18th century. The two islands joined as one state in 1888 and gained independence in 1962. In 1976, the twin–island State became a Republic within the Commonwealth, with the President as Head of State.

Executive power lies with the Prime Minster and the Cabinet. The legislature consists of an elected House of Representatives and an appointed Senate.

Tobago has a separate House of Assembly, which is responsible for some of the island’s domestic affairs.

The petroleum sector is by far the most important sector with petrochemicals and natural gas enjoying prime economic focus.

This shift in emphasis away from crude oil production was to cash in on the abundant natural gas supplies, which are used as feedstock in the domestic production of methanol and ammonia for export. Trinidad and Tobago is one of the world’s largest producers of both commodities. In 1999, a huge Atlantic Liquefied Natural Gas project came on stream, catering for export production of the gas as a fuel.

The energy sector has been boosting some sub-sectors, namely distribution, transportation and construction, earning a total share of over one-third of GDP.

Tourism is an important growth sector. A good blend of cultural diversity and special interest areas are among the features supporting this sector. The famous annual carnival and Jazz festival, which is held in Tobago, offer much potential for boasting this sector.

Red  – Warmth and vitality of the sun, people and nation