Motto: Out of Many, One People

Land of Wood and Water

Jamaica is the fifth-largest island country in the Caribbean. The indigenous people, the Taíno, called it Xaymaca in Arawakan. meaning the “Land of Wood and Water” or the “Land of Springs”. Once a Spanish possession known as Santiago, in 1655 it came under the rule of England (later Great Britain), and was called Jamaica. It achieved full independence from the United Kingdom on 6 August 1962. With 2.8 million people, it is the third most populous Anglophone country in the Americas, after the United States and Canada. 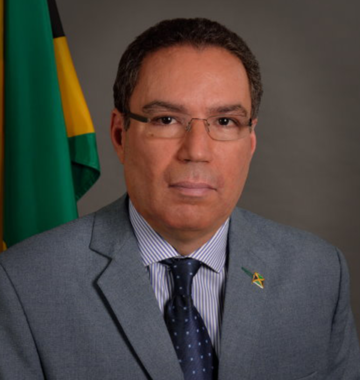 Minister of Science, Energy and Technology

Ministry of Science, Energy and Technology

Jamaica is situated in the Caribbean Sea, 150 km south of Cuba and 160 km west of Haiti.

Jamaica was first settled by Amerindians. Columbus encountered the island in 1494, and it fell under Spanish possession from 1509 to 1655, before becoming a British colony.

During the social unrest of the 1930s, birth was given to two of the country’s major political parties. Alexander Bustamante formed the Jamaica Labour Party (JLP) while Norman Manley formed the People’s Indies Federation in 1958, but withdrew following a referendum in 1961. The PNP instituted a democratic socialist government from 1974-80, and the JLP established free-enterprise government from 1980.

Jamaica’s economy is largely dependent on the services sectors for growth. In 2012, services accounted for almost 75 per cent of GDP, and the majority of Jamaica’s foreign exchange is gained from tourism, remittances and bauxite. The country is also one of the world’s largest suppliers of aluminium ore.

Agriculture, forestry and fishing also contribute to Jamaica’s foreign exchange earnings. There are considerable resources of both freshwater and sea fish.

New Year’s Day, January 1;Ash Wednesday; Good Friday; Easter Monday; Labour Day, May 23; Emancipation Day, August 1; Independence Day, August 6; National Heroes Day, third Monday in October; Christmas Day December 25; Boxing Day December 26.  Holidays that fall on a Sunday are observed the following Monday. In the case of Labour Day only, if this falls on a Saturday or Sunday then Monday will be a holiday

Black – Hardship overcome and to be faced